horzcat: Dimensions of matrices are not consistent. Error message confusion

Cg Gc on 9 Jan 2019
⋮
Commented: Cg Gc on 10 Jan 2019
I am running a very long and not well scripted code to plot trajectories a month at a time. I also also doing some pretty off the wall math to do different calculations.
My code works great for the entire year, until I get to Christmas, then I get the horzcat error messge.
Error using horzcat
Dimensions of matrices being concatenated are not consistent.
Error in Plot_7day_traj_Fullyear (line 1186)
t7Data = [t7Data C.data(:,9:12)];
I tracked the error to a problem between two files, but the files have the same number of rows and columns as they were generated in sequence by the same program at the same time.
Here is the entire code. The short version of it. I excluded months January-November as they work perfectly fine. Attached are the troublesome files. tdump86122418 is brought into t7Data. tdump86122500 is not. I would attach more, but there are 124 for December.
%December
delimiterIn = ' ';
headerlinesIn = 12;%12 in this year
t7Data = [];
p7Data = [];
for i = 1337:1460 %Set this to the number of files you want to import.
C = importdata(tdumpnames7DayTraj(i,2),delimiterIn,headerlinesIn);
t7Data = [t7Data C.data(:,9:12)];
p7Data = [p7Data C.data(:,9:13)];
end
I don't mean to be a pain, but if someone can find a difference between the two text files and explain why I am getting this message, I would appreciate it. Another odd quirk, if I change (:,9:12) to (:,anynumberlessthan9:12) it works fine. I thought about doing this, but it throws the scripts I have following it all out of wack.
As far as I can tell, it just appears for an unknown reason and then disappears. Not

⋮
tdumpnames7DayTraj is a string that has several columns of names for files where I am pulling the trajectory information from. 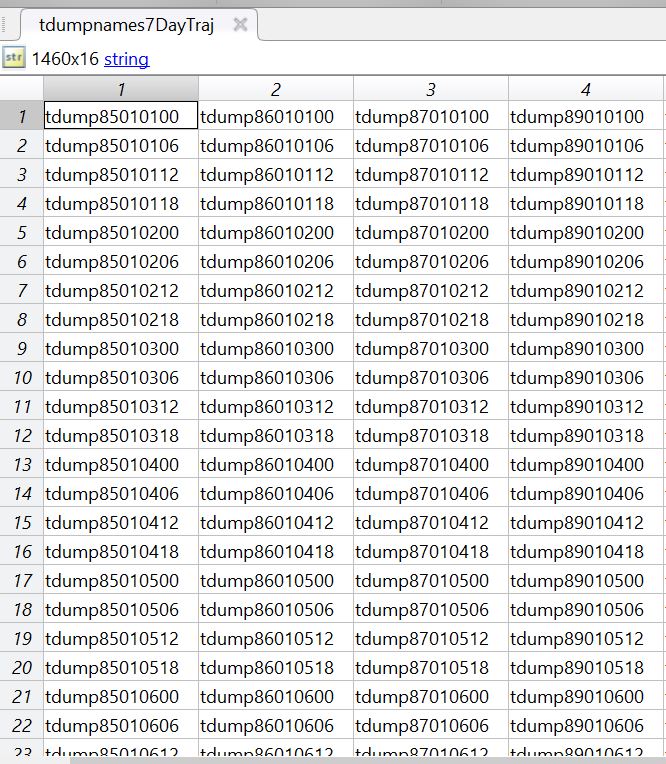 ⋮
The problem isn't with the file names, it is what is being pulled from the files. This is why I was able to track the problem down to something in between the two dates. The code works for other years, but not for this year, making me thing that there is something wrong with the two text files, but I can't seem to find any differences.
When I tried looking at C.Data, I drew upon the 124 files it was meant to pull from. There were 12 columns with a long, very long, list of rows.

⋮
Well that's your problem them: the files you provided to us have 22 columns, and that is going to be incompatible with the files that only have 12 columns.

⋮
All files have the same number of columns. I am only needing columns 9-12 or 9-13.
There is something that MATLAB doesn't like with the one Christmas trajectory. I skipped over it and everything works fine now.