Roohollah Milimonfared on 25 Aug 2019
⋮
Answered: darova on 26 Aug 2019
Accepted Answer: Image Analyst
I have a 3D gray-scale array that represents a bag with several objects inside. I need to find (segment) any object with flat surface/s in the bag. Knowing the approximate intensity range of these objects, I binarized the volume, and removed objects with volumes below a threshold.
The result was getting some of those objects as individual blobs and some attached to nearby objects.
Now, I would like to detect blobs with flat surfaces. Any suggestion?

⋮
What do you mean by 'flat blob'?

⋮
That's right. Only expand it to 3D. An example of a 3D blob with flat surfaces is a cylinder (flat surfaces at its two ends).
In my problem, the blobs have more complicated shapes, but some have flat surfaces that I would like to use as a characteristic to detect them.

⋮
convn() takes two input volumes. One is probably the (BW or GrayScale?) volume. What should be the second 3D array?

⋮
I meant convhulln() or whatever the multi-dimensional convex hull function is called.

C = intersect(stats.ConvexHull{1,1},stats.VoxelList{1,1},'rows');
C is empty which means the blob has no point on its convex hull.
Below is the plot of voxels (red) and convex hull points (blue). On the top surface, the convex hull points are located at the edges. Can we use this fact to say it is a (nearly) flat surface? 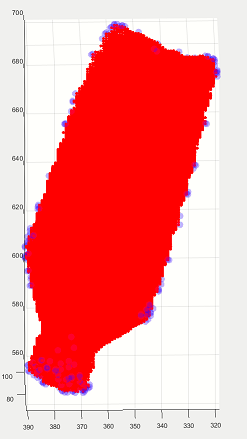 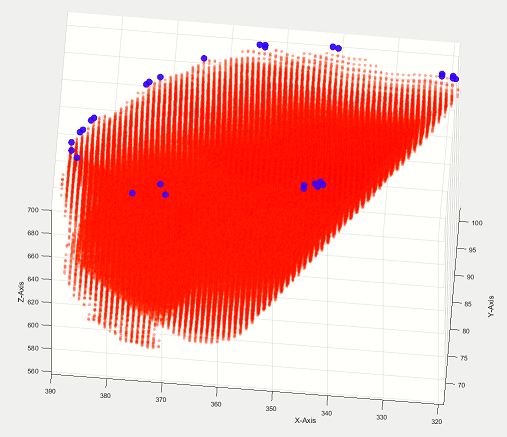 Still, need to verify this for my other random-shaped blobs with flat surfaces.
Thoughts and opinions on this is much appreciated.

Once you have boundary faces: find all neighbour faces for each node
If angles between surfaces is about zero then we have a flat face