Note if a picture is worth a thousand words, an animation shall worth more than a thousand pictures. Animated Adaline is a MATLAB® class that visualizes how an Adaline model is trained. More specifically, Animated Adaline can show how each iteration of gradient descent lowers down the cost function, thus moves the decision boundary at the same time. For beginners, this demonstrates clearly how gradient descent is used to do machine learning classification.

Please refresh the browser to restart the animation.

In the above animation, the top one is a scatter plot of some data from the iris dataset from UCI server. The red line is the decision boundary. The lower one is a plot of the cost function of an Adaline model.

Users can even compare these three different kinds of gradient descent by animating them at the same time.

See test.m for simple examples for getting started quickly.

Instantiate it with the data file. Note this uses a bogus dataset included with this script.

If you just want to use default settings, then you can start the animation (See Example 1 in test.m) 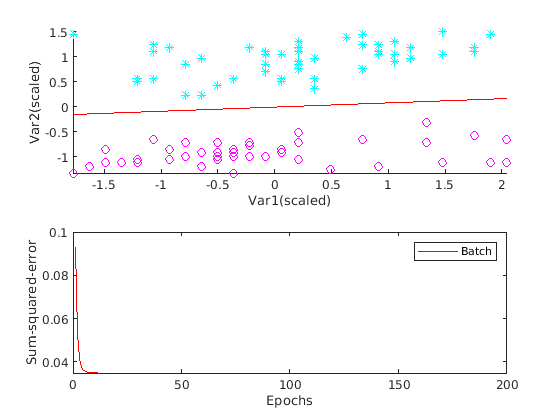 By default, only batch gradient descent is turned on. You can use the following three member variables to turn on/off them individually. The following example shows the mini batch only. 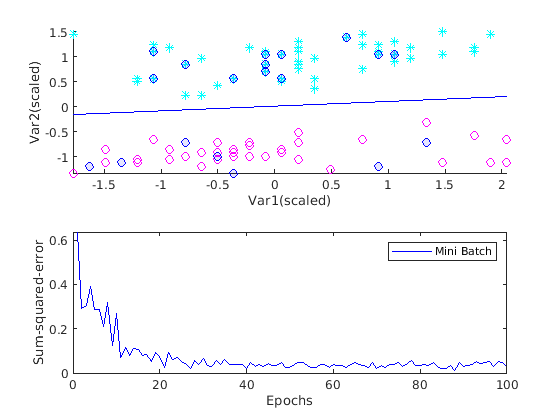 If you set all three gradient descents to be true, you can then generate an animation similar to the third one from top of this page.

This learning rate is closed to the threshold. Bigger alpha will make the cost function diverge. Visually the decision boundary moves away from the opimized location. 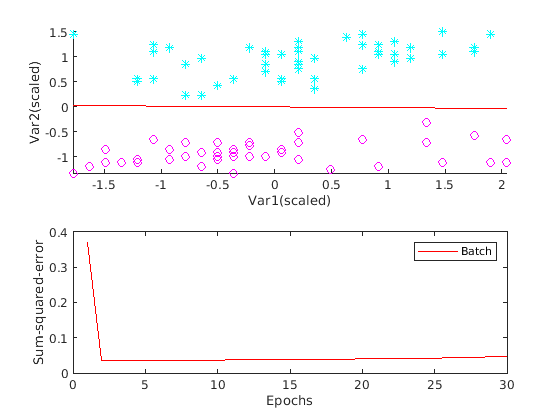 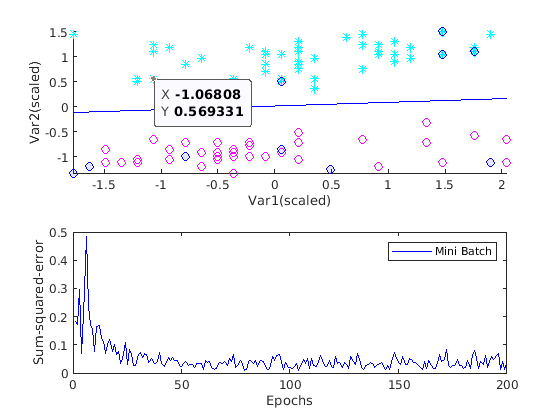 By default, mini batch size is 20. By setting a smaller size, the cost function plot oscillates more than the Mini Batch plot above, which uses the default size of 20.

A bogus dataset is included for illustration purpose. It is saved in CSV format.

A script is provided to download and process the iris dataset from UCI server.

Use your own data

The dataset you provided needs to be three columns. The first one is the first feature, the second one is the second feature. The third one needs to be the label. It must be either 1 or -1. If you want to use your own dataset, save it into a format like the bogus data, then it can be used by Animated Adaline. 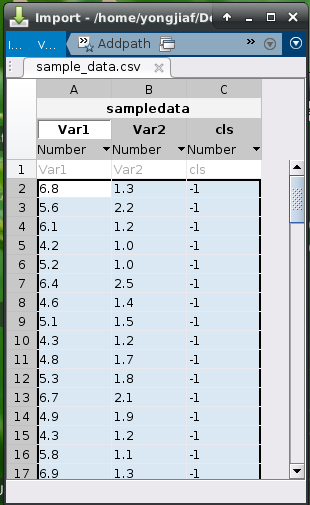