These live scripts can be used as part of a lecture, as activities in an instructional setting, or as interactive assignments to be completed outside of class. The module is divided into three folders with the same content offered for different use: Full Scripts, Visualizations, and Practice.

Opening Integrals.prj will add the module to your MATLAB path and open a navigation page where you can choose interactive examples by topic or type. The instructions inside the live scripts will guide you through the exercises and activities. Get started with each live script by running it one section at a time. To stop running the script or a section midway (for example, when an animation is in progress), use the Stop button in the RUN section of the Live Editor tab in the MATLAB Toolstrip.

This module assumes a knowledge of functions that is standard in precalculus course materials regarding powers, exponentials, absolute values, logarithms, sines, cosines, rational functions, and asymptotes. It also assumes knowledge of basic area formulas, including the area of a trapezoid. With the exception of integralRiemann.mlx and vizRiemann.mlx, the scripts are written to follow Calculus-Derivatives and expect basic understanding of derivatives and derivative rules.

Minimal use of MATLAB syntax is required to complete some of the interactive practice, but it is all reviewed in the scripts themselves as needed. If you wish a more complete introduction to MATLAB, you can take MATLAB Onramp – a free two-hour introductory tutorial that teaches the essentials of MATLAB.

Looking for more? Find an issue? Have a suggestion? Have questions?
Contact the MathWorks online teaching team.

This folder includes scripts that integrate visualizations with instructional content and practice for active instruction or supported review.

An interactive script that facilitates exploration of the results of applying the integral as an antiderivative and presents opportunities for practice with immediate feedback. 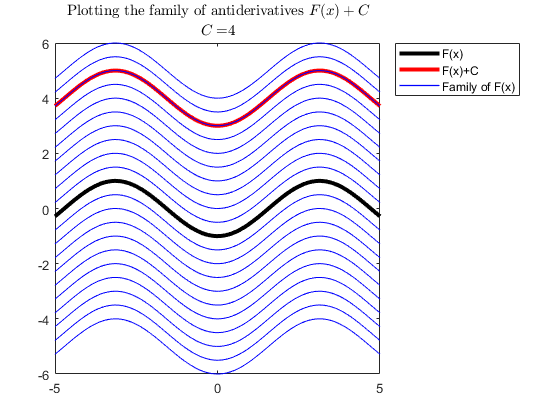 An interactive script that presents visualizations of u-substitution and integration by parts as well as scaffolded and randomized practice with immediate feedback.

An interactive script that presents visualizations of integration by parts as well as focused and randomized practice with immediate feedback. 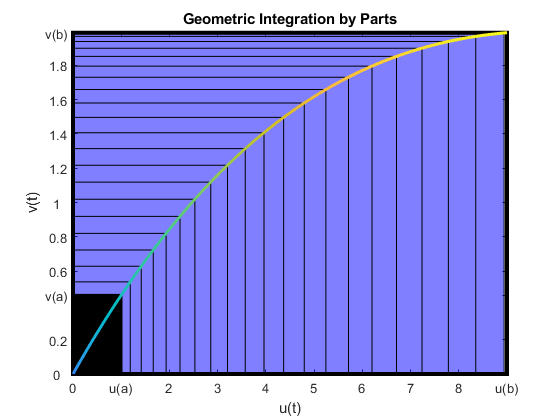 An interactive script that presents visualizations of the fundamental theorem of calculus as well as an opportunity to practice computing definite integrals by hand with immediate feedback. 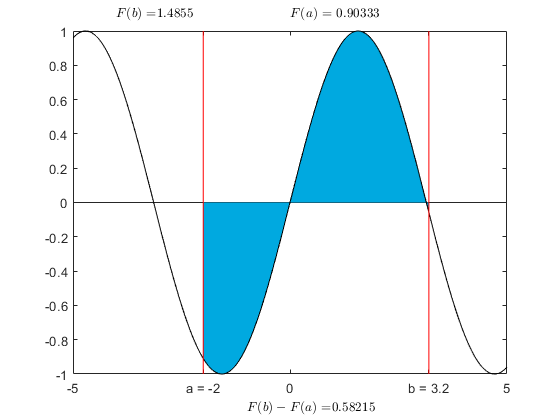 This folder includes scripts for the visualization examples alone, as you might use them in a lecture or class demonstration.

An interactive script presenting visualizations of approximating the area under a user-defined curve by a user-defined number of rectangular or trapezoidal components as well as options to picture the error in each approximation. The only addition to this set of examples is the option to use a randomly selected point in each interval to determine the height of the rectangular approximation. This only makes sense in the context of an area defined by a function rather than by data, but could be useful for discussing why we generally just stick with interval endpoints. 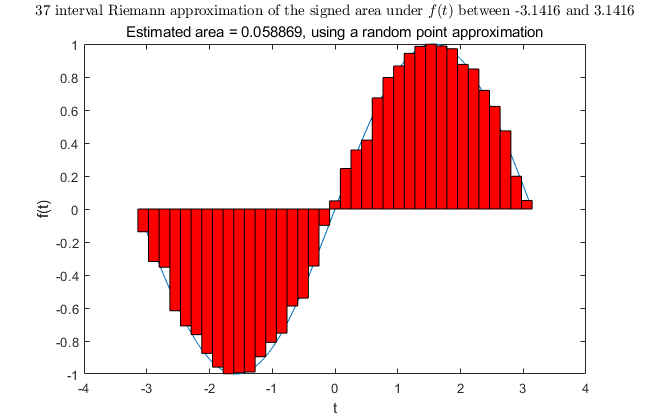 An interactive script presenting geometric interpretations of both the integral and derivative forms of the Fundamental Theorem of Calculus, applied to user-defined functions.

An interactive script presenting visualizations displaying the different curves generated by plotting f(g(x)) against g(x) or against x, as well as exploring the impact of using a step of dx or a step of dg = g'(x)dx to traverse the region of interest. The animation code geometrically demonstrates some of the potential savings by showing a default example where the dx integral adds and subtracts a region that the dg integral entirely ignores.

An interactive script presenting a geometric understanding of integration by parts. The default values generate a classic visualization of a definite integration by parts, but the code is designed to allow investigation of more complicated functions as well by allowing the separation of the resulting image into positive and negative regions with respect to each variable as well as showing or hiding the lines depicting the standard intervals for each variable.

An interactive script presenting a visualization of the family of antiderivatives.

This folder includes scripts that are purely directed at student practice, as you might assign for homework or use for understanding checks during class or offer to students to help them study for an exam.

A MATLAB app that allows the user to select among four different categories of derivative practice (simple derivatives, linear combinations of powers, product rule, and chain rule) or integral practice (simple integrals, definite integrals, substitution, and integration by parts) or any combination thereof. Variables can be restricted to x and t or varied randomly over a larger set of options. The solutions can be displayed immediately or multiple attempts at each problem can be recorded. Results are tracked by type of problem including correct solutions, incorrect solutions, and problems which are not even attempted before generating a new one. Some constructive feedback for common errors is automatically generated. 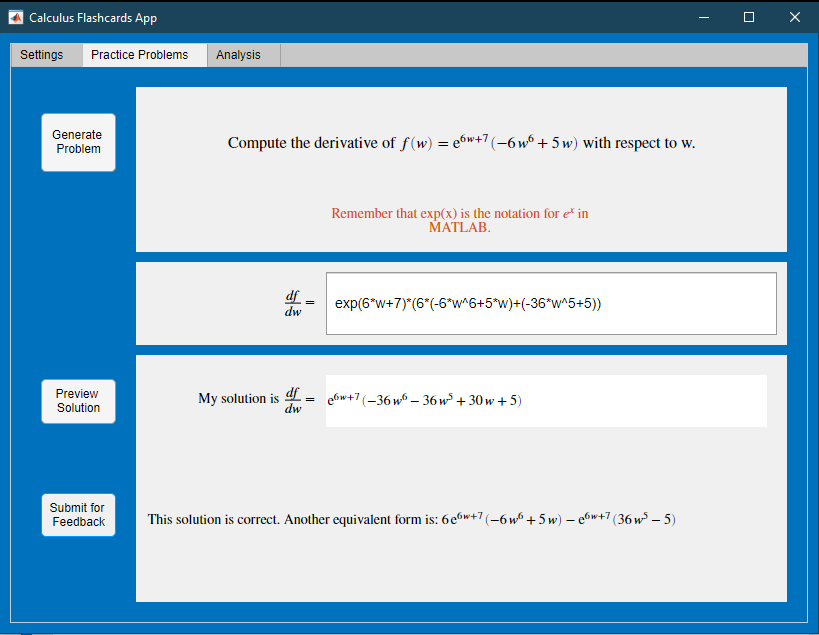 An interactive set of randomly generated practice problems on definite integrals, including divergent integrals with finite bounds. The overall success rate within each session is available upon request but is not saved.

This script pulls together the interactive exercises for each simple antiderivative from integralAntiderivatives.mlx as well as the randomized practice.

This script pulls together the interactive exercises for substitution from integralSubstitution.mlx as well as the randomized practice.

This script pulls together the interactive exercises for applying the method of integration by parts presented in integralByParts.mlx as well as the randomized practice.

Setup To Use the Calculus Flashcards App

The license for this module is available in the LICENSE.md file in this GitHub repository.

Have any questions or feedback? Contact the MathWorks online teaching team.