Vectors is a set of MATLAB tools for the creation of 3D (and 2D) scientific drawings and illustrations. It currently contains the following functions:

and the utility function points2axes.

Producing high-quality illustrations and drawings in 3D for math-related disciplines is a surprisingly difficult endeavor due to the lack of dedicated illustration software.

PowerPoint has some built-in drawing capabilities that are easy to use but limited in scope, while more capable vector-based drawing programs such as Adobe Illustrator or Inkscape have steep learning curves. Most importantly, all of these tools are designed for drawing on two-dimensional canvases and do not inherently support 3D scenes or 3D rendering and shading. CAD software is better suited for this purpose, but is notoriously difficult to learn and too cumbersome for purely illustrative purposes. Research scientists and science instructors alike often have to juggle between these and other programs to obtain the desired results.

MATLAB's visualization engine, on the other hand, is built for 3D scenes and supports basic lines and surfaces out of the box. It is the goal of this toolkit to expand on these capabilities with a growing set of ready-to-use, high-level shapes and functions geared toward the creation of publication-quality illustrations and drawings for scientific research and education.

The Vectors toolkit is compatible with MATLAB R2021a and later releases.

Any feedback or suggestions are welcome!

H = vector(O,P,...) returns the handle H of a Group object containing the vector(s) from O to P.

Vector properties are based on the following vector components: the cone (arrowhead), the shaft, and an optional sphere marking the origin. The cone itself consists of the base, the rim, the outer cone surface, and the tip. The cone is slightly beveled in order to improve its appearance at certain angles. 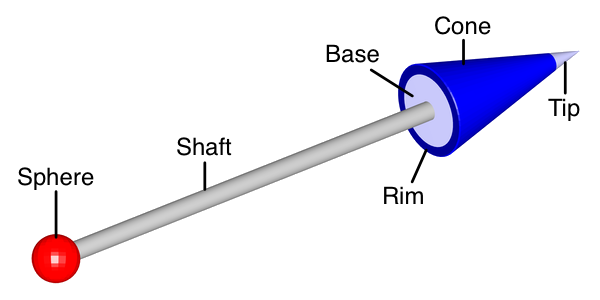 vector(O,P,style) draws a vector or group of vectors with properties specified in short form by the character vector style. style can contain any or all of the following properties in any order: the main color, the width (diameter) of the shaft in points, where 1 point = 1/72 of an inch, and the tip highlight mode (see below for more details).

If a property is specified more than once (as in style = 'rg'), then only the first occurrence ('r') is taken into account. Invalid characters in style will be ignored.

Resizing the figure or axes will also change the vector dimensions. Call vectorupdate in order to restore it to its intended appearance. 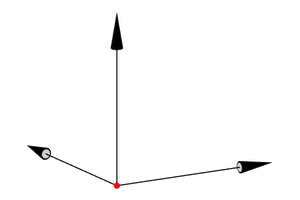 vectorupdate restores the appearance of vectors that were distorted or changed in size due to changes in figure size, axis limits, or data aspect ratio, and updates vector properties passed as arguments. By default, vectorupdate acts on all vectors found in the current axes. Axis limits are frozen at the current values to ensure that vectors are properly dimensioned after vectorupdate is called.

vectorupdate(ax) will act on all vectors in the axes specified by ax instead of the current axes.

vectorupdate(..., Name-Value-Pairs) updates vector properties using comma-separated 'Name',Value syntax or the equal-sign syntax Name=Value introduced in R2021a. All properties that can be passed as arguments to vector are supported. In addition, the vector origin(s) and endpoint(s) can be changed using the properties 'O' and 'P', respectively.

h = vectorupdate(...) returns the handle h of a Group object containing the restored or updated vectors.

The figure and axes containing the restored or updated vectors will become the current figure and current axes, respectively, when vectorupdate is executed. 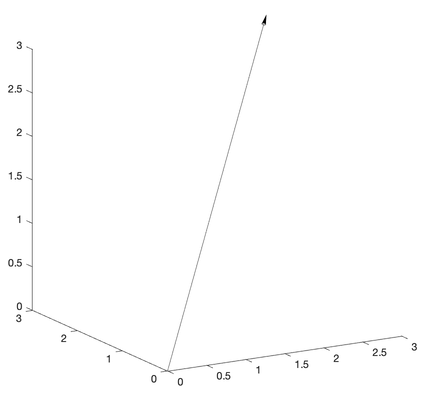 The vector is drawn based on the axis limits that are in effect before vector is called. MATLAB automatically adjusts the limits in order to accommodate the new vector, which in turn affects the vector's appearance. Call vectorupdate to correct this problem, as recommended by the warning issued by vector. 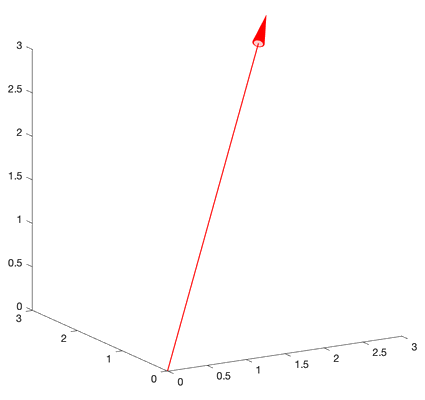