How to have a numerical legend showing with a categorical histogram?

Konstantin J on 10 May 2022
⋮
Edited: dpb on 11 May 2022
Hi,
I am trying to do something like in the following example below. I am trying to get a histogram with the distribution of genders. But additionally, I would like to include another array with stroke values (0 - no stroke, 1 - stroke). I want them to be in legend, but also as bars. 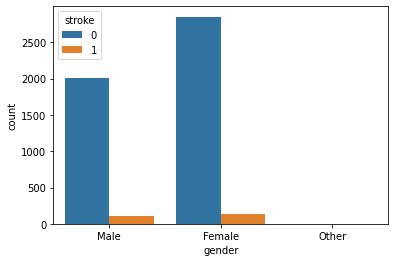 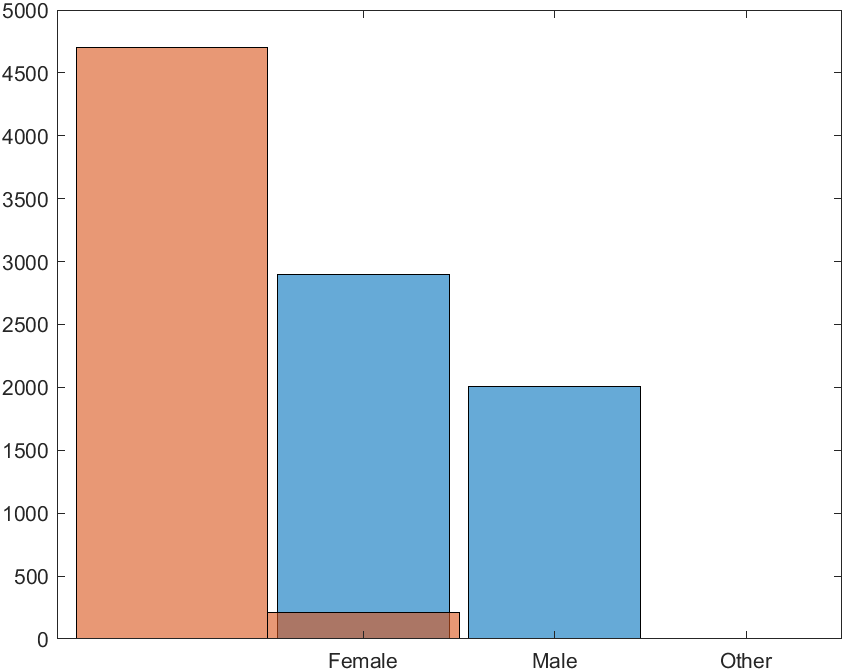 Any help is appreciated,

⋮
You need to use the 'grouped' style with the y data a 3 row by 2 column array to get the grouped plot. Folks could help a lot easier if you would attach your data file instead of having to make up something...

⋮
Thanks, it is pretty understandable with your example, but I am working on this dataset:
https://www.kaggle.com/fedesoriano/stroke-prediction-dataset
I would need to get this figure based on the columns in the .csv.
How can I include a column with gender categorical values and column with numerical values (0 and 1) into one grouped plot? Also the legend should take information from the column (so that I get something like in the very first figure).
a=[table.gender,table.stroke];
b =categorical({'Male','Female'},{'Male','Female'},"Ordinal",1);
hB=bar(b,a,'grouped','BarWidth',1);
ylim([0 2900])
Error using categorical/cat (line 123)
Unable to concatenate a double array and a categorical array.
Error in categorical/horzcat (line 22)
a = cat(2,varargin{:});

⋮
Well, you can't put two different classes of data into a single array; simply can't be done.
And, you don't need/want to; the only way to produce a figure such as the target from the raw data is to use it to PREDICT whether the individual had a stroke or not -- that's what the whole site is about. However, somewhere has to be the corollary data of "YES/NO" to be able to train a neural net or use as the observation value if trying to fit a parameterized model and I did not see that data.
As the figure shows, the Y axis is a number; whether it was an observed or predicted value it doesn't say, but it is (and must be) a numeric value that is the sum of the number of each class for each gender.
The binary yes/no data are what are counted to create those; the labels are just labels; the categorical data itself isn't plotted at all -- you're confusing the individual observation with the summary information derived from it.
But, somewhere has to be the observed result in order to be able to test a model -- at this point you apparently don't have/haven't developed a model...that's the first step, but it needs the actual end result data to be able to do so...

⋮
There is one column with observed values of "1" if a person has had a stroke in the past and 0 if there was no stroke. Do you mean that?

⋮
Oh. I see. Looking at one of the models that echo'ed the input I see the "Stroke" column is in the dataset but isn't listed/shown in the preview window.
Attach the .mat file you've loaded here; it takes a registration from that site that I don't have/don't want to create.
But, in general, to get the data to create the plot from the raw data using the observed stroke data,
tStroke=readtable('StrokeFile.csv');
tStroke.gender=categorical(tStroke.gender,{'Male','Female'},"Ordinal",1);
tStroke.stroke=logical(tStroke.stroke);
tG=groupsummary(tStroke,{'gender','stroke'});
will then give you the summary statistics from which the bar graph can be created.
ADDENDUM: The definition of the categorical variable for gender is as it is so the plot will show the x axis order of "Male" first; otherwise MATLAB creates/orders categories alphabetically which would put "Female" first. That's the only reason for making ordinal.