How to match colorbar with colormap ranges in surf? 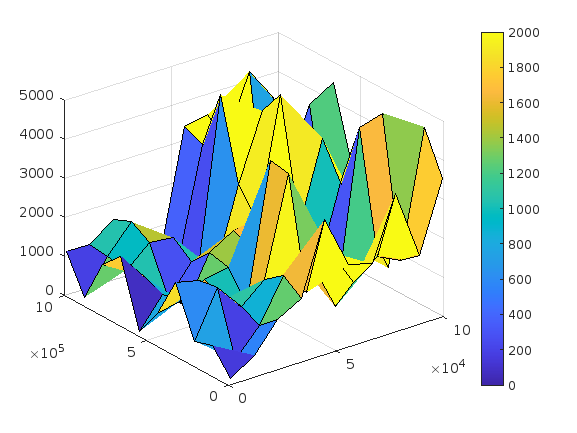 ⋮
Dear Kevin
Thank you for your kind help.
Unfortunately, this does not solve my "problem". If you see your example, the maximum value (2000) corresponds to a yellow tone, which does not match the maximum shown in the surf plot.
Similary, even after removing the line:
caxis([0 2000])% You can also change the limits of your colormap.
The maximum limits are not coloured according to the colorbar. For instance, the data tip shown in the following picture shows a Z value of 4587.12 which according to the colour bar should be in the yellow regime however, it is in shades of blue and green [1000, 3000] approx. In my case, the maximum value for the first dimension of my 10x10(x5) data set presents a peak around 1250 (coloured in aqua) whereas the color bar shows a yellow tone for this value range: How can I match the surf colormap to the 10 colours shown by the colorbar?
To clarify, I included a fourth argument, as you suggested without success
srf = surf(io_V1_mat, RL_mat, VL(:,:,vsPtr), VL(:,:,vsPtr) );
Any thoughts? 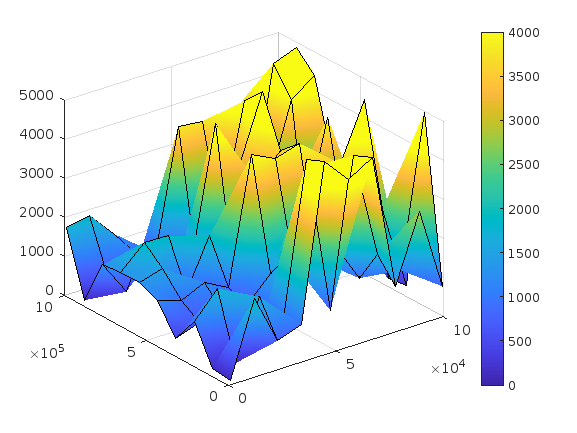 ⋮
Dear Kevin
My apologies for the late reply
You were absolutely right!
Adding:
'FaceColor', 'interp'
did the trick
I think this information is explained in the 'FaceColor' section from the surf help page, however, it wasn't so evident for me. Perhaps more examples of the use of this modifier are needed.
Final result:

Thanks for your kind help