Joseph Edelman on 22 Jun 2020
⋮
Commented: Mhd Jam on 23 Jan 2021
I have a written script designed to calculate flow distribution in a 3-loop pipe network using the Hardy-cross method. In the output file I've created, the correction factors for each loop correctly converge to zero after a certain amount of iterations, and the flow distributions appear to be very close to the true values; however, the absolute maximum difference in flow rate from one iteration to the next appears to be incorrect. The maximum difference from one iteration to the next should approach zero, just as the correction factors are, yet instead the maximum difference appears to converge to approximately 2.29. This doesn't make sense, since one can observe in the output file that at the final iterations the maximum difference should be much smaller than what is displayed. I've looked over the code extensively, and can't seem to figure out where I've made an error. Any help would be greatly appreciated. Below I've attached a photo of a portion of the output file, as well as the program itself. 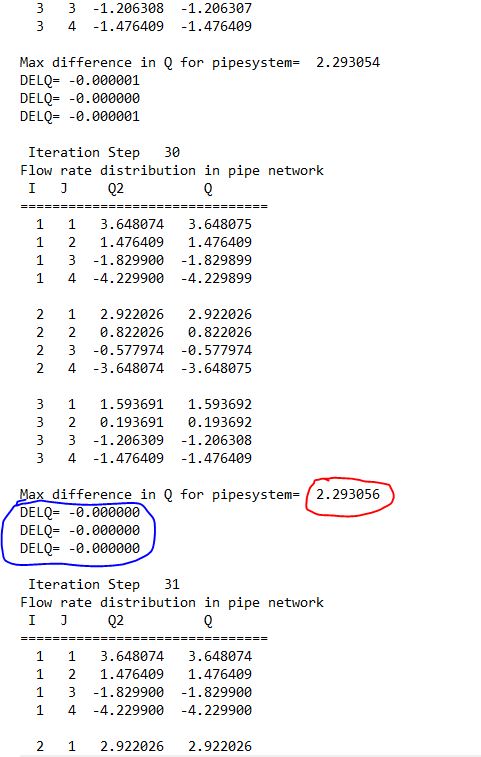 ⋮
Dear Joseph,
Could you solve the issue? if so, would you please share it with us?
Thank you!

Robert U on 22 Jun 2020
⋮
Hi Joseph Edelman,
it seems as if line 52 produces complex numbers for HF. In consequence the values of DELQ are complex as well while you only write the real part. Therefore, you do not compare values of same types. My first guess would be you have to rethink brackets. The operator precedence might not work as you intend it.
https://de.mathworks.com/help/matlab/matlab_prog/operator-precedence.html
Kind regards,
Robert

⋮
Thank you for the help! I'll see if I can do something about that.