Ejike Ogadah on 20 Sep 2020
⋮
Commented: Ejike Ogadah on 21 Sep 2020
Hi in the DFIG wind turbine phasor example ; power_wind_dfig ;
the measurements block uses a negative gain for active and reactive power.
This means the original active power into the grid is negative, meaning the wind turbine
is abosrbing power from the grid. But this is diffent from the explanation in the documentation ; https://www.mathworks.com/help/physmod/sps/ug/wind-farm-dfig-phasor-model.html
[ Simulation 1. Turbine response to a change in wind speed ].
My question is, why is the active power sign negative before the conversion
in the measurements block and how can I change it to positive.

⋮
Thanks @ Vasishta Bhargava,
I understand the concepts you described above. But as shown in the screen shots from the power_wind_dfig measurements, the real power is negative once the negative sign in the gain block is removed. That is the active power measured by the voltmeter is multiplied by a negative sign to get positive active power. This is what I want to understand why.
I think it might have something to do with the reference direction of active power flow in the system, but I am not sure. As mentioned above, this is the explanation on the example. So the WT is supplying power to the grid ( Simulation : 1. Turbine response to a change in wind speed
Open the "Wind Speed" step block specifying the wind speed. Initially, wind speed is set at 8 m/s, then at t = 5s, wind speed increases suddenly at 14 m/s. Start simulation and observe the signals on the "Wind Turbine" scope monitoring the wind turbine voltage, current, generated active and reactive powers, DC bus voltage and turbine speed. At t = 5 s, the generated active power starts increasing smoothly (together with the turbine speed) to reach its rated value of 9 MW in approximately 15 s. Over that time frame the turbine speed will have increased from 0.8 pu to 1.21 pu. Initially, the pitch angle of the turbine blades is zero degree and the turbine operating point follows the red curve of the turbine power characteristics up to point D. Then the pitch angle is increased from 0 deg to 0.76 deg in order to limit the mechanical power. Observe also the voltage and the generated reactive power. The reactive power is controlled to maintain a 1 pu voltage. At nominal power, the wind turbine absorbs 0.68 Mvar (generated Q = -0.68 Mvar) to control voltage at 1pu. If you change the mode of operation to "Var regulation" with the "Generated reactive power Qref " set to zero, you will observe that voltage increases to 1.021 pu when the wind turbine generates its nominal power at unity power factor. ) 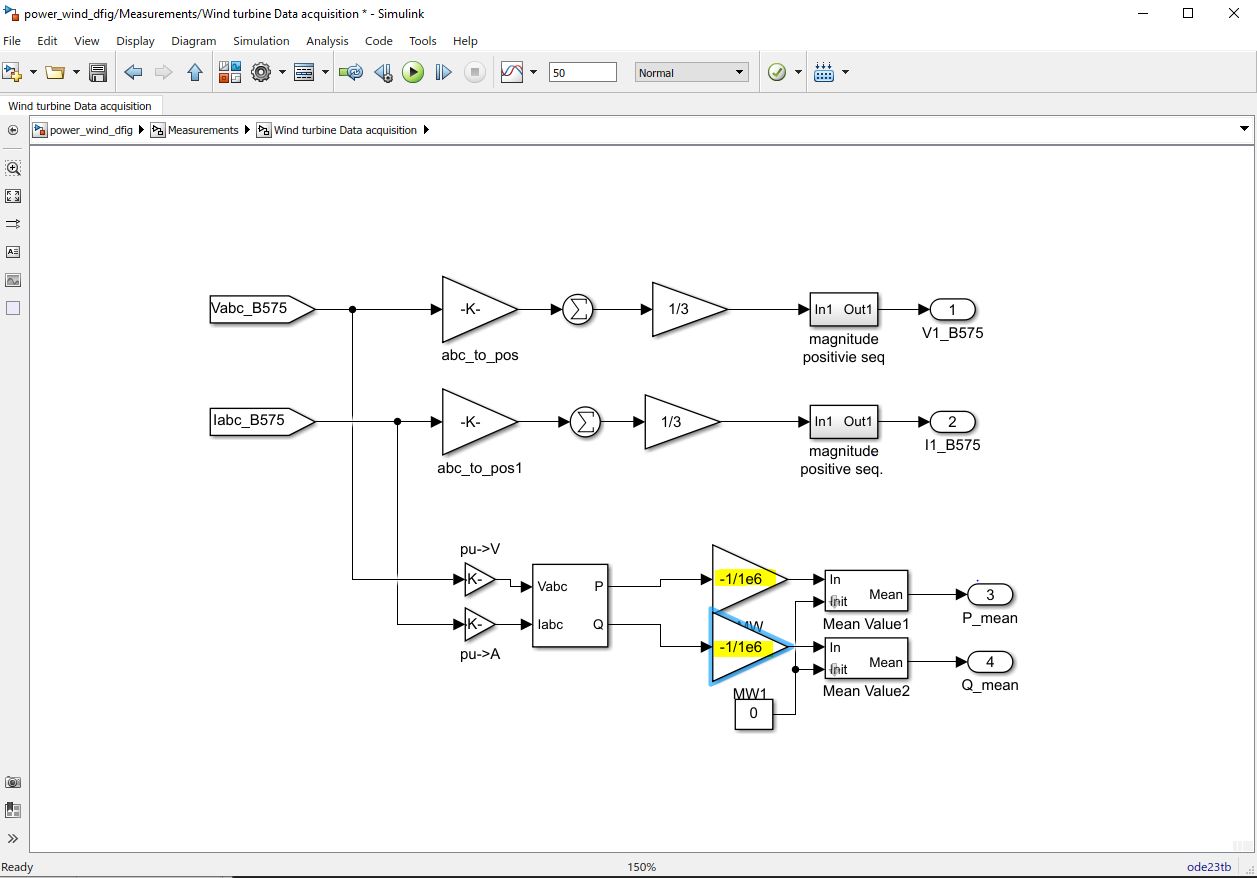 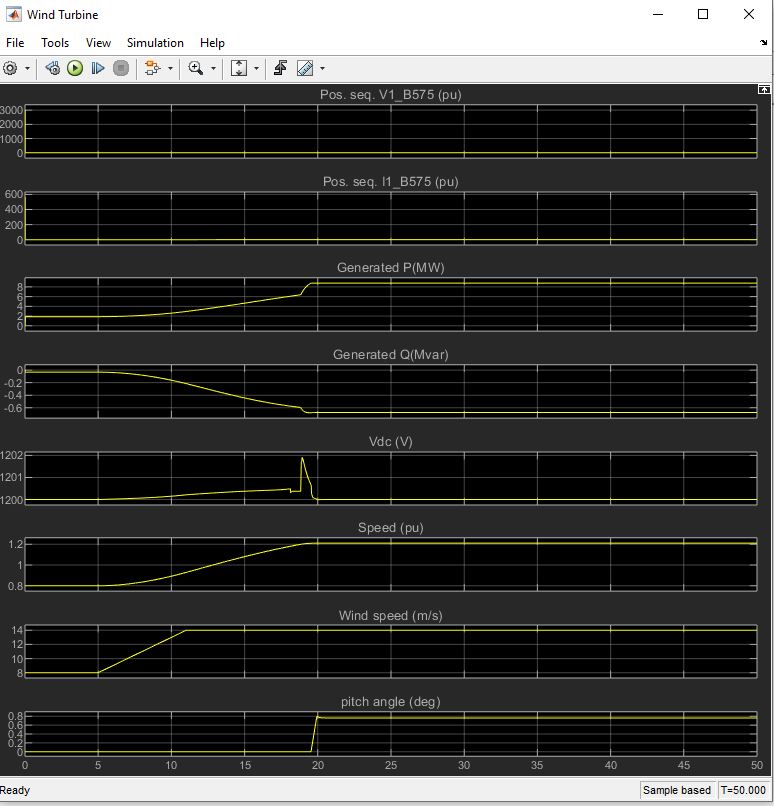 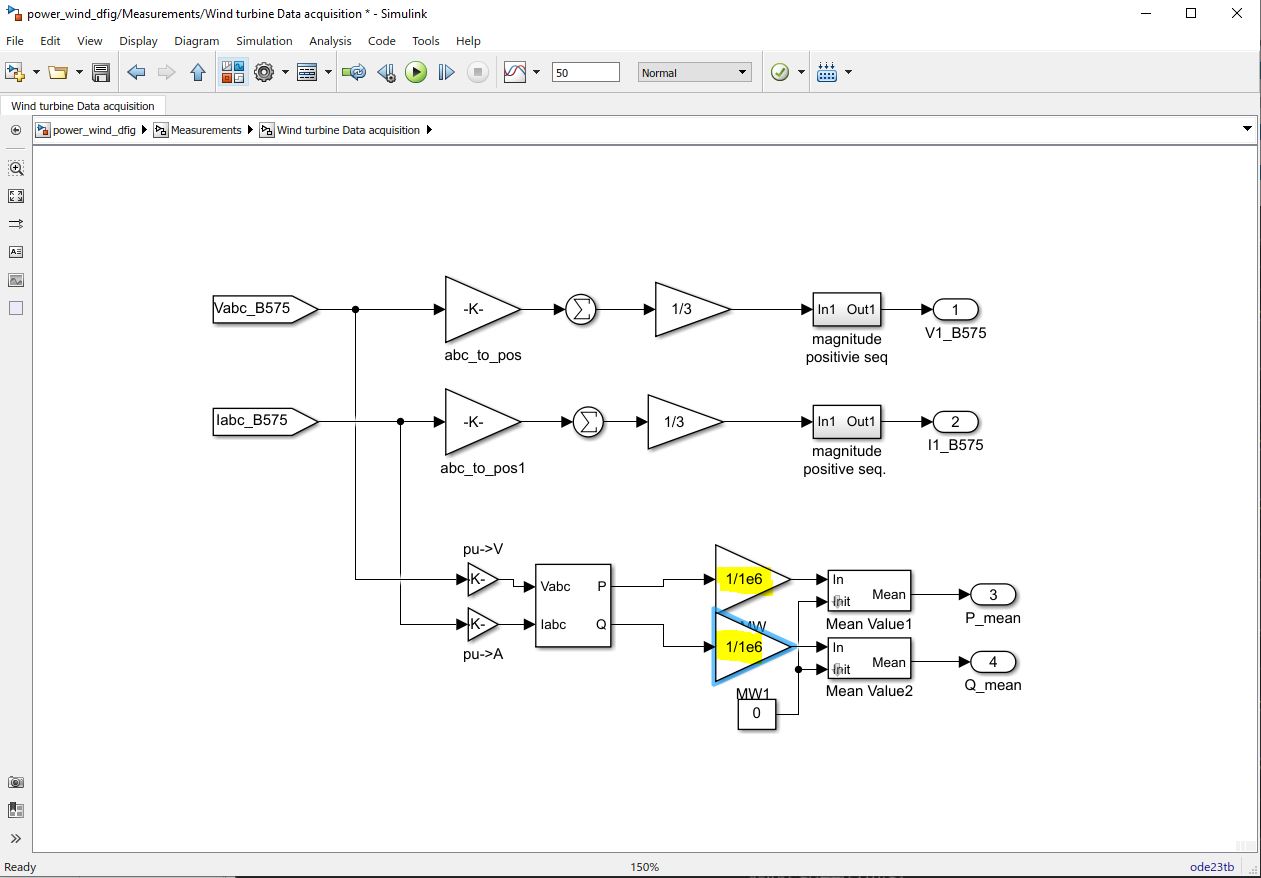 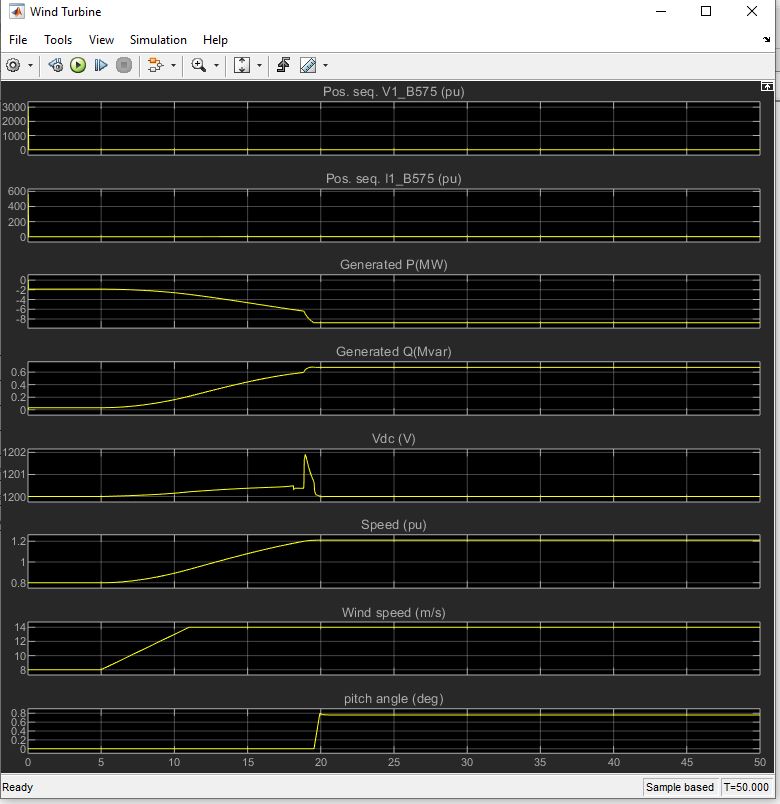