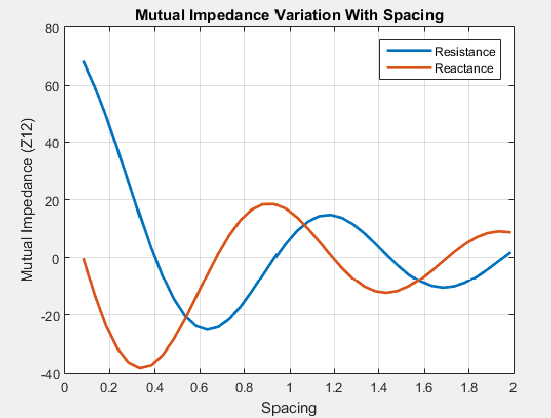 How can I realize the plot in figure? It is in the documentation of Matlab, at https://ch.mathworks.com/help/antenna/ug/mutual-coupling.html#bup3x41 ,but i don't know how it can be realized.
It is the variation of the mutual impedence of two dipole in parallel configuration.
If this function isn't implementated in the software someone can give me a code that realize this or a similar function?
Thank you.

Aman Vyas on 5 Oct 2020
⋮
Hi,
Basically this graph gives the mutual impedance against spacing where as the spacing keeps increases that way impedance varies.
Impedance is generally vector summation of resistance and inductance which is given by Z=R+jwL. Hence it has two components R and jwL(Reactance) which has been plotted as separate componentsin blue and orange color.
You can develop Z function as summation of R and L and from formula where impedance and spacing of two dipoles of antenna are linked based on that you can plot z with d(spacing).
Hope it helps !