Sort an Array with sortrows ( ) with two columns

Patrick Benz on 19 Feb 2021
⋮
Edited: Stephen Cobeldick on 5 Mar 2021
Accepted Answer: Stephen Cobeldick
Hey guys,
I'm sorting an 82x4 arraywith sortrows. I want it to be sorted in a descending way. First the second column shall be significant and for tiebreakers the third column.
My code is:
Knotenpaare=sortrows(Auswertung,[2 3],'descend')
where Auswertung is the array. The first 40 rows of the array are sorted beautifully. But at the moment the values in the second column switch from positive to negative the sorting changes. 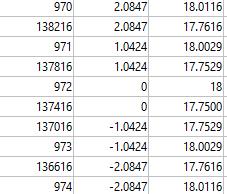 Why are the values in the third column now ascending?
Is there a better way to sort these kinds of arrays ?

⋮
"Why are the values in the third column now ascending?"
Probably because the values in the second column are not the same. They might look the same when displayed to five significant digits, but have you actually compared them (e.g. diff, eq, etc.)?

⋮
The Values are exactly the same.
These are coordinates of a mesh and the nodes have the exact same x-coordinate (2. column) and only differ in y-direction (3. column). The bigger value in the third column is the node at the surface and the lower value is underneath the surface.

⋮
Shouldn't matter, but try
Knotenpaare=sortrows(Auswertung,[2 3],{'descend','descend'})
just in case.
Attach the section of the data as a .mat file so folks can try to duplicate symptoms

⋮
@Patrick Benz: I assume also, that the equally looking numbers -1.0424 are not identical, if you consider all decimal places. Please post the data as MAT file. The 6 relevant rows are enough to finde the difference.

⋮
I have rechecked the numbers and shame on me.
They aren't exactly the same, although they should. They differ in the 6th digit right of the decimal point.
It is -1.04237926 and -1.04237354.
That is why I tried to "fix" it with
node_Num=round(node_Num(:,1:4),5);
but then the first Value is smaller, because it is getting more negative so to say.
Is there an option to cut the number after 5 digits off? and not only visual.
I have attached the imported node Values as .mat File.
The columns are: node No., x-coordinate, y-coordinate, z-coordinate.
And I want them sorted in that way, that the two nodes with the very similar x-coordinate descending with the y-coordinate beeing the tiebreaker

⋮
I'm sorry, that I have to unaccept your answer.
I just realized that it is in some case a problem that the original data are altered in that way, that I need the Data in the first column to kind of stay intact.
Hence these are the Node Numbers I need them be correct. When I am using your suggestion the I have multiple times the same node number. Is there a way to use your method to sort the data but keep the node numbers sorted, but not altered?
Or is there a different option to reassign the correct node numbers to the rows afterwards?

⋮
"Is there a way to use your method to sort the data but keep the node numbers sorted, but not altered?"
One simple approach is to make a copy of the data and process that. Then use the second output from sortrows (which is the sort index) to sort your original data. That is why I gave that hint in my answer.
"I need the Data in the first column to kind of stay intact."
Then don't apply uniquetol the first column, which you can achieve with a minor change to the for loop:
for k = 2:size(A,2)
% ^ start from the second column
"Or is there a different option to reassign the correct node numbers to the rows afterwards?"
The question is not clear to me.

⋮
In theory I understand what you mean. I got the secound output which is the row number of the unsorted Data.
So I can take the row number, grab the Node number regarding to the sort index from the original data and place it in the first column of my sorted data.
So my first Idea would be to solve the problem with a loop.
for i = 1:length(Sortierung)
Sortierung(i,1)=Auswertung(index(i),1)
end
But I have learned that Matlab is more efficient, when using arrays instead of loops.
Is there a better way than the loop?
Sorry for all the questions, but since this will be a major project I'm trying to get better with matlab every day I'm working on it

the cyclist on 19 Feb 2021
⋮
See my answer (and other comments) to this very similar question. (As with the comments above, the premise is that the displayed value is not sufficient to see a tiny difference between the numbers.)