Rattlesnakes issue a telltale warning when they feel threatened by someone getting too close. The maraca-like sound starts with a clack-clack-clack from keratinous segments crashing into one another at their tail ends. When a would-be predator or hapless hiker closes in, the rattling becomes much faster and seemingly louder.

Researchers who work in the field with rattlesnakes recognized that auditory shift, but its function remained enigmatic. It makes the snakes seem much closer than they actually are. Neuroscientist Boris Chagnaud was struck by this behavior for the first time when he visited the Technical University of Munich (TUM) terrarium, housing 100 western diamondback rattlesnakes, which are venomous snakes in the viper family.

Chagnaud, who usually studies fish that produce sound using a muscle like those of rattlesnakes, was there to ask zoologist Tobias Kohl about using rattlesnake spinal cord tissue for studying the neuronal networks producing their rattling. “When I went to the animal facility, I realized that the snakes were interacting with us when we were approaching the terrarium,” Chagnaud remembered. “Nobody actually stopped to look at why we have the impression that the snake is closer than it is.”

Afterward, he contacted his colleague at Ludwig-Maximilians-University of Munich (LMU Munich), acoustic psychophysics expert Lutz Wiegrebe, about designing an experiment that would show what the rattlesnakes are doing and how they’re perceived. Wiegrebe came up with a unique two-part experiment that utilized virtual reality (VR) technology and MATLAB® to better understand the snakes’ warnings and the experiences of animals that hear their rattling.

“You notice a change in the sound pattern, but it was unclear to us what that was until we started to record and analyze it,” said Chagnaud, who is now a neuroscience professor at the University of Graz in Austria. LMU Munich neurobiologists Michael Forsthofer and Michael Schutte, along with TUM zoologists Kohl and Harald Luksch, joined the research project. Together, they carried out separate psychophysical experiments on rattlesnakes and human participants.

When the researchers saw the data, they were surprised. The snakes abruptly changed their rattling frequency, not the amplitude of the sound, to alter other animals’ behavior. Humans respond by misjudging the distance, thinking the snake is closer than it actually is. This intricate level of auditory trickery wasn’t what the scientists expected. They published their findings in the journal Current Biology, shedding new light on interspecies communication.

Rattlesnakes avoid making their presence known, preferring to remain hidden. “The snake doesn’t want to tell you where it is when you’re still 100 meters away,” Chagnaud said. He cited reports of people walking right next to snakes without realizing it because the well-camouflaged snakes calculated that the humans would keep moving along. But if a snake senses a close, threatening movement, the rattling comes into play.

Past scientific literature on rattlesnake responses abounds. As Forsthofer dug through those studies, he noticed that highly controlled stimulation was largely absent.

The bigger the snake, the more segments in the tail, the louder it will be. Using Signal Processing Toolbox, Wiegrebe processed the rattling audio from the looming experiments to zero in on the big tail flicks.

“Researchers put on chainmail leggings and approached the snakes on foot to see when they would flee, strike, or rattle,” he said. “There were people who put on metal gloves and tapped the snake on the nose to see what would happen.” One experiment he came across involved putting a snake in a box and then opening it rapidly to elicit rattling.

Forsthofer and his colleagues took a more naturalistic approach. They made sure each of the 25 western diamondback rattlesnakes brought from the terrarium had time to calm down and acclimate under a clay pot shelter before an experimental session began. The team also isolated the snakes from one another throughout the experiments and let them rest after each session.

Initially, the team utilized a human-shaped torso as a looming stimulus that resembled what the rattlesnakes saw in the terrarium, using strings to move it toward a stationary snake on an elevated platform. Even though the stimulus elicited the familiar rattling, it wasn’t as controlled as the researchers hoped, especially since the torso movement generated noise, impacting the subsequent acoustic analysis.

For the second experiment, the team used a black disk projected onto a white screen that grew in size at a constant velocity to simulate an approaching threat. Once the disk reached its largest size, the stimulus stayed on screen for five seconds before “retreating” in a mirrored way. Wiegrebe, who led all the programming for the study, and co-author Schutte wrote custom scripts with Psychophysics Toolbox, a MATLAB community toolbox, to generate the looming visual stimuli.

“The advantage of the stimulus was that people have used it with many different animals, including humans,” Chagnaud said. “The closer the person comes, the more you have the impression that the person is bigger because of the way our visual system is organized.”

Placing a video camera and two infrared spotlights above the platform allowed the scientists to monitor each rattlesnake, including its head orientation in relation to the screen, so that they only counted sessions where the screen was in the snake’s line of vision. An electrostatic microphone recorded the sound.

Using MATLAB, Forsthofer input information such as the snake’s name, the desired stimulation paradigm, and the trial number. Then the software would run and record the stimulus trajectory, the snake’s response, and a video of the experiment for the team. That functionality helped enormously since they couldn’t really tell a snake to sit still. Such automation also enabled tight control over the psychophysical experiments, especially in delivering the stimuli, to avoid introducing human bias.

Although a few past experiments Forsthofer read involved recording rattling and analyzing the audio for spectrum components, the team focused on how loud the snakes would get. If scientists previously looked at frequency, it was mostly focused on all spectral components of the sound instead of the frequency of the tail shake itself, and they also tested for dependence on a controlled stimulation. 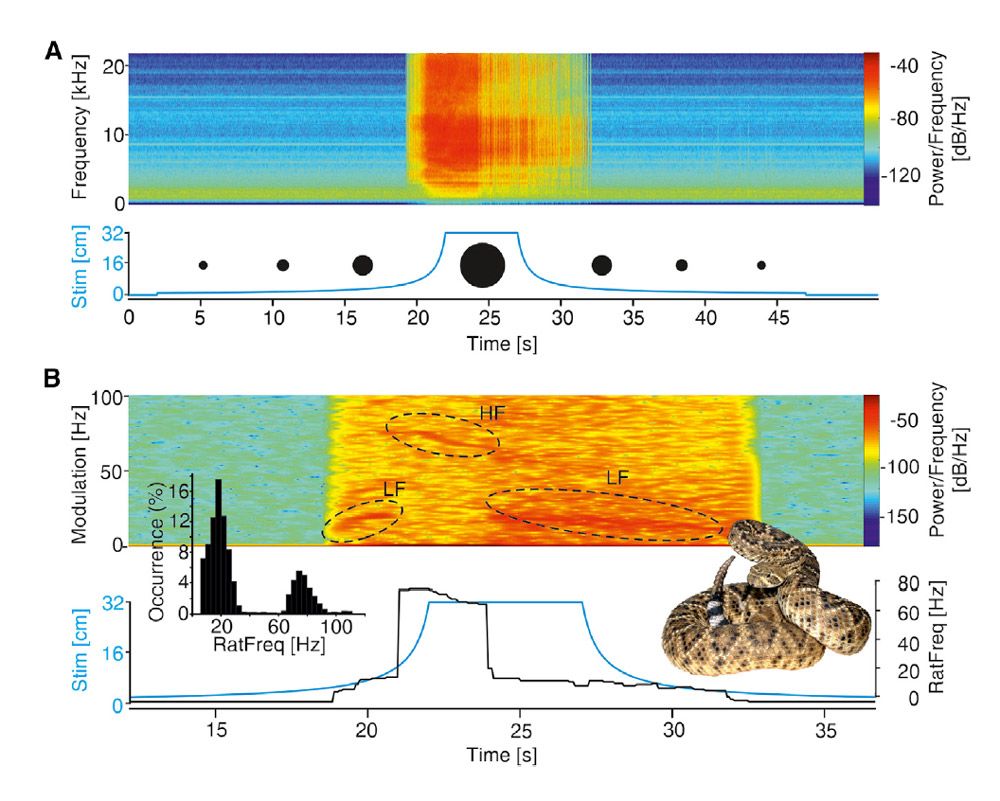 The rattlesnake’s main sound comes from the tail segments hitting one another at a frequency in the 10,000- to 15,000-hertz range, not the individual tail flicks. Overall volume is related to the size of the rattle, and thereby, the snake’s size. The bigger the snake, the more segments in the tail, the louder it will be. Using Signal Processing Toolbox™, Wiegrebe processed the rattling audio from the looming experiments to zero in on the big tail flicks.

“We saw that there wasn’t a big difference in loudness, but in the frequency, there was a very strong effect,” Forsthofer said. “It was clear in all the snakes we successfully tested.”

Like a sensor-based automotive alert that beeps faster the closer a driver gets to another car or object, the western diamondback rattlesnakes started by producing a linear frequency increase. But the sound frequency suddenly jumped from under 40 Hz to the 60–100 Hz range. Did this leap actually make animals back off? The scientists set out to answer that without subjecting anyone to an angry venomous snake.

A Fake Snake in the Grass

Much like different humans reciting the same line from a play, the western diamondback rattlesnakes in the experiments produced the frequency shift in various ways. Some had louder rattling, some had softer rattling, and some got to the jump at a lower frequency than others.

From that cacophony, the scientists needed a reliable, standardized stimulus for the second part of their study investigating animals’ perception of the rattling. Wiegrebe and Schutte took the varied rattlesnake audio and used it to generate a synthetic sound that retained the key frequency profile the team had discovered. The sound was incredibly realistic.

“There have been other studies measuring tail shake frequency with a laser barrier that snakes passed through while flicking their tails, and those numbers are comparable to what we derived, which is why we think our method to extract the shake frequency worked,” Forsthofer said.

Early on, team members mused about testing the synthetic rattling on buffalos at the Munich Zoo but quickly decided that human participants would be easier. Wiegrebe designed an experiment where the human volunteer sat in a chair and donned a head-mounted VR display in a room with speakers arrayed vertically and horizontally. The VR headset displayed a grassy landscape.

The 11 male and female participants in the study only knew that they would hear a sound, not what the sound would be. The idea was not to bias them. They received instructions to judge the distance of that sound and press a button on a joystick when they thought the sound source was 1 meter (3.3 feet) away.

Having an array of speakers in multiple positions allowed the neuroscientists to play the synthetic rattling in a realistic position. “The sound was calculated so that the vertical elevation was considered,” Chagnaud said. “We did this because people use elevation cues in order to know where an object is.” Each trial began randomly with the virtual snake starting to rattle at one of six distances before automatically “approaching” the subject. Meanwhile, the software knew precisely where the human subject was in relation to the virtual snake. 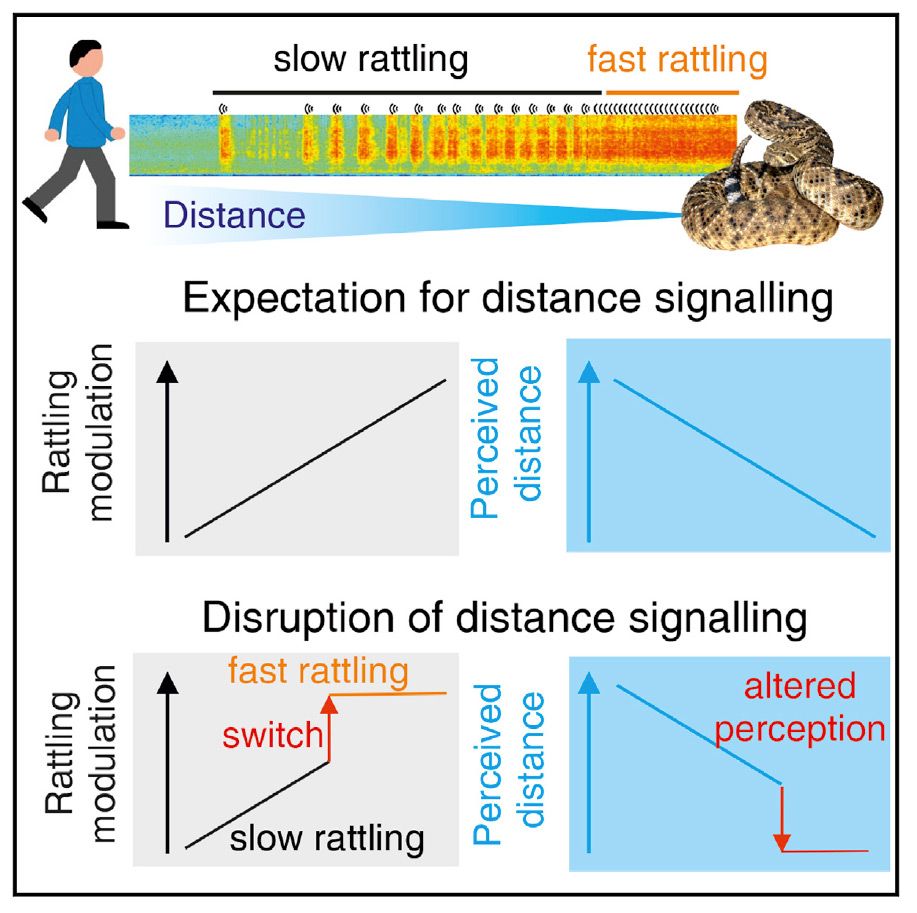 “We presented rattling sounds with—and without—the frequency change to them,” Forsthofer said. Psychoacoustical data from the trials showed humans underestimating their distance to the virtual snake as soon as they heard the switch. “We found that whenever the frequency change happened, many people thought they were close enough to the virtual snake to press the button.”

The neuroscientists’ work illuminating this auditory illusion rippled worldwide and was even featured on a German quiz show. Chagnaud credited sharp-minded Wiegrebe with having the vision for the VR experiments. “It was far more complicated than I would have ever been able to generate in a psychophysics setting,” he said.

The frequency jump works because mammals’ auditory systems are universal, Chagnaud said, but he added that we still don’t know the snakes’ intentions. He’d like to find out whether other rattlesnakes besides the western diamondbacks exhibit the same behavior.

Open questions remain on the human side as well, including whether the reaction to the rattling is a startle response or auditory processing in the brain that informs distance perception. Chagnaud is in touch with another neuroscientist who specializes in functional magnetic resonance imaging (fMRI). “I’d like to find out exactly what is happening in our brains when we hear this trick,” he said. “I hope to convince my colleague to test this, but it’s a tough challenge because you have to know where to search.”

The MATLAB code used in this research project is available from File Exchange: Rattlesnake rattling and human psychophysics