Use Model-Based Design with MATLAB and Simulink to run simulations of power electronics, the electrical grid, and controller; generate production microcontroller code; and achieve certification

“With Model-Based Design we saw exactly how our controller would work with the hardware even while the hardware was being developed. After we had the hardware, refinements were easy because the simulations matched what we saw on the scope, and that gave us tremendous confidence in the design.” 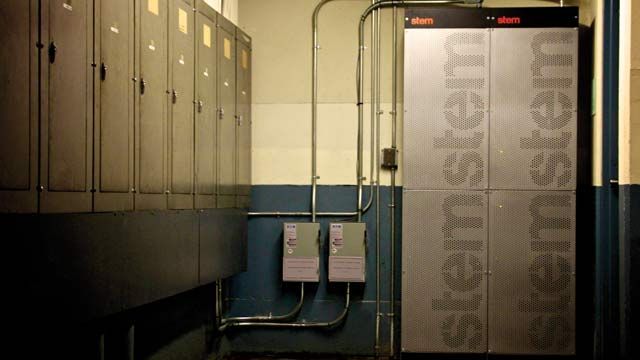 In many areas, electricity bills for large businesses include charges for the total amount of electricity used, as well as demand charges based on peak usage. High demand for just 15 minutes can account for half the total charges on a monthly electricity bill. Stem’s distributed storage technology reduces peak loads by predicting usage patterns and deploying stored energy when needed. Recharged during off-peak hours, the batteries in Stem’s locker-sized PowerStore tower can provide up to 18 kilowatts of power on demand.

“We thought we were taking a development timeline risk, but hindsight has shown that Model-Based Design actually reduced risk because we could develop and debug the control system before hardware was available,” says David Erhart, VP of Engineering at Stem. “In fact, our simulations with Simulink and Simscape Electrical enabled us to make hardware design decisions. As a result, we shortened the product development cycle, completing it with just one board respin.”

As a startup company with a small team of engineers, Stem needed to minimize time-to-market while keeping down costs for its first product. One way to achieve both objectives was to reduce board spins, which typically cost $15,000 or more each and consume weeks of the engineering schedule. To this end, Stem wanted to design and verify the control algorithms via simulation using a highly accurate plant model. The algorithms would need to control insulated gate bipolar transistors (IGBTs) that switch 24,000 times per second as they interact with the electric grid and the PowerStore batteries.

PowerStore had to be certified to the IEEE 1547 standard for interconnecting distributed resources with electric power systems and the UL 1741 standard for inverters, converters, controllers, and interconnection system equipment used with distributed energy resources. These standards include strict anti-islanding rules, which require all power-producing inverters connected to the grid to shut off within seconds after a power failure. Stem sought an approach that would enable them to streamline the certification process.

Working in Simulink and Simscape Electrical™, Brad Landseadel, chief power electronics engineer, and his team developed a plant model that included relays, IGBTs, inductors, DC-link capacitors, and pulse width modulators (PWMs) as well as a submodel of the electric grid.

They used Simulink and Control System Toolbox™ to model PowerStore’s advanced electronic control system, including the anti-islanding control logic. In Stateflow®, they modeled a state machine that manages faults, processes commands from a power monitor, and initiates sequences to charge or discharge batteries.

To debug and verify the control algorithm and its nine proportional-integral (PI) control loops, the team simulated the controller and the plant in Simulink. During these simulations, the team gained insights that influenced the hardware design. For example, they determined optimal inductance values and identified the need for additional relays.

After testing and refining the hardware and controller design, Stem began the certification process. During certification testing, the team created Simulink simulations to replicate tests not passed by their initial design.

“We updated the controller model, re-generated code, and passed the tests the following day,” says Erhart. “That capability got us through certification on our first try and at a pace about 25% faster than normal.”

Stem achieved UL 1741 and IEEE 1547 certifications from TÜV for the PowerStore system, which is now in production.