With exponential input, est, from outside and exponential growth, eat, from inside, the solution, y(t), is a combination of two exponentials.

OK. We're still talking about first order differential equations with a dy dt. And there is still a gross term proportional to the balance. This might be the interest that's added on to y. And then there is input, a source term, of deposits being made all the time.

And the output, the solution is called the exponential response. That word response says what comes out when e to the st goes in. And as before, we have some starting deposit, y of 0. Initial condition at time 0. OK.

Here is the key point, that with this nice source function, the solution, or one solution, a particular solution, will be just a multiple of e to the st. So all I have to do is find that number, capital Y, and I've got a solution to that equation. How do I do it? Substitute this into the equation and solve for Y. So let's do that.

That's just s minus a times Y is 1. Right? I took a times Y and put it on the left side of the equation. So I've discovered the exponential response. 1 over s minus a. OK. So I have a solution to the equation.

So capital Y, I now know is that. So I have an e to the st over-- I'm putting in Y, the right value of Y. So that's the particular solution that I've found. Plus any null solution. So remember, the null solutions, that term is gone. So the source is 0. That's why the word null.

Are you ready now for the complete solution with satisfying the initial conditions? So now I'm going to-- this in the correct form. This tells me what C has to be. So I put it in and I have this solution.

I can make it look a little nicer. I want to. I want to separate out the y of 0 part, the part that's just growing from the initial condition, from the part that is coming from the source term. So I just want to put that together with this.

So I have the same s minus a below. Here is an e to the st above. And I have a minus, that 1 over s minus a, times e to the at. And then I have this term, which is growing. Well, this is really good. This is the part growing out of the initial deposit.

So a t equals 0, that's 1 minus 1, I'm getting 0. So I would call that y vp. I'll introduce those letters, not standard, for that part. And then y homogeneous, or y null, is this part. OK. Problem solved. The exponential grows in this way, and the initial condition grows directly that way. OK.

The problem is solved with one exception. And now I have to take a minute with that exception. The exception is the formula breaks down if s equals a. If s equals a, I'm dividing by 0. My formula is falling apart. And that's the case of resonance. So let me put over here, s equal a. That resonance.

And we always have to expect that that's a possibility, that we're putting money with the same exponential as the natural growth of the money, or whatever we're growing. And our formula has to change. You what you might say it's infinite, because I'm dividing by 0.

But notice the part above is also 0. If s equals a, this is e to the st minus e to the at. Those are the same. So I have a 0/0 situation. My formula is breaking down, but it isn't dying. It needs more thinking. The case of resonance needs to-- I have to understand what this is when s equals a.

Let me tell you what it is. And then show you why. So this is the case s equal a. So if s equal a, then y very particular plus y null space. So it's this very particular solution that has to have a different form.

And here's the form it gets. A factor t appears. You just learn to recognize resonance by that factor t. So it'll be a t e to the at. a is the same as s now, so s doesn't appear. So that's the solution which starts from 0, and it comes from the input. And this is the part that starts from y of 0 and grows.

So you see, eventually, this is going to be the bigger one. The resonant case, it grows like e to the at, with that little bit extra growth of t. OK. So now I have a solution in that special case also, when s equals a. All right.

Do you want to know how this comes out of this as s approaches a? Let me take three minutes to tell you about that. It's L'Hopital's rule. Do you remember from calculus, 0/0, the way to deal with that was called by this guy's name, L'Hopital? Hospital, I guess. Probably hospital in French.

So L'Hopital's rule was the reason behind this formula for resonance. But again, I emphasize that expect a factor t when you have this resonance. OK. So that's the solution for the best possible right-hand side e to the st. Well, maybe the best is a constant. Second simplest is an exponential. Next, will come sines and cosigns. That's the next lecture. Thanks. 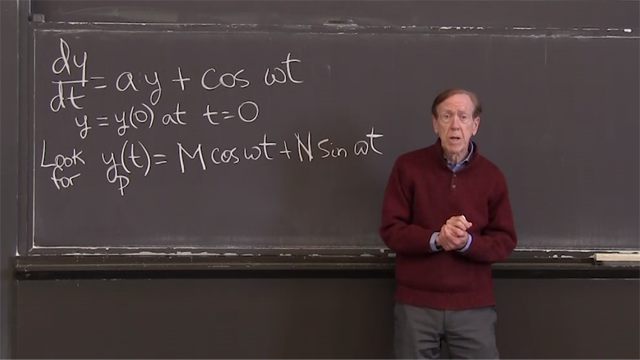 2:37
The Smart Emergency Response System Using MATLAB and...
6:50
New Spreadsheet Import Tool in R2011b
5:14
Converting from a Formula to a Script to a Function
13:23
Applying Model-Based Design to an On-Board Driver Support...
0:52
BEST Robotics Kickoff: Simulink Support for VEX Cortex...