We need to allow the signs in there. Because, if I look for a cosine, if I tried only this part, I could match that. I'd have a times the cosine, that would be cosine. But the derivative of a cosine is a sine function. So signs are going to get in there and we have to allow them into the solution.

OK. So that's the right thing to assume. Actually there will be, you'll see, three different ways to write the answer to this problem. And this is the first sort of most straightforward, but not the best in the long run.

If you check this equation, for example, omega times the M will give me a a omega with a minus with a minus. And then a times N will also have an a omega. And the same omega squared plus a squared, they cancel to give 0. And this equation is also solved.

So one more important problem solved. Well, we found the particular solution. I haven't added in-- I haven't match the initial condition.

And that's the oscillation that keeps going. That if we're listening to radio or if we have alternating current, this is what we see, the null solution. The thing that's coming with no source term.

Usually a is negative and that disappears. That's called the transient term. So the null solution would be have an ae to the at as always. But I'm not so interested in that because it disappears. You don't hear it after a minute. And this is the solution that you're-- this is what your ear is hearing.

OK. So we've got one form of the answer. Now, that's a pretty nice form, but it's not perfect. I can't see exactly-- this can be simplified in a really nice way. So when we work with sines and cosines, it's this next step that's important.

I believe that that same yp of t can be written in a different way as what also-- another form, a different-- well I should say, another form for the same y of t. Another form will be the same y of t. You see what I don't like is having a cosine and a sine because those are out of phase, and they're combining it into something, and I want to find out what their combining into. And it's really nice. They're combining into a single cosine, but not just omega t, there's a lag, a phase shift. The angle involved is often called the phase.

So the two, sine and cosine, combine to give a phase shift with some amplitude, maybe I'll call it G, the gain. Or often it would be called capital R just for-- because it's-- sort of what you're seeing here is polar coordinates. So I want to match this, which has the G and the alpha-- polar coordinates is really the right way to think of this. G and an alpha, a magnitude and an angle. I want to match that with the form I already had.

So I'll use a little trigonometry here to remember that this is equal to-- I have a G. Do you remember a formula for the cosine of a minus b? The cosine of a difference is cosine of omega t, cosine of alpha, plus-- it's a plus here because it's a minus there-- sine omega t sine alpha. So I have just written this out in the two-term form, and I did that so that I could match the two-term form I already had.

So can I just do that matching? The cosine omega t, the M must be G cosine alpha. And they N must be G sine alpha.

So I now have two equations. The M and the N, I still remember what those are. I figured those out.

But now I want to convert the M N form to the G alpha form, and this is what I have to do. And it's the usual thing with polar coordinates. How can I get-- how do I discover what G is there, and what alpha is? The trick is-- the one fundamental identity when you see cosines and sines-- is to remember that cosine squared plus sine squared is 1. I'm going to use that, have to use it.

OK that's-- ah, what about alpha? That's the angle. So I have to-- again, I'm thinking trig here. How am I going to get alpha here? I want to get G out of this formula now, and just focus on the alpha. Previously I got alpha out of it and got the G.

So the sinusoidal identity says that I can rewrite that solution into this solution. And I really see the key number in the whole thing is the gain, the magnitude. It's how loud the station comes through if we're tuning a radio. So and again, this is the response that's keeps going because the cosine oscillates forever. There will be also something coming from the initial condition that we expect to die out.

So I mentioned at the very start that there were three forms of the answer to this cosine input, and I've given you two. I've given you the M and N form. You could say rectangular coordinates-- cosines and sines. I've given you the polar form, which is a gain, a magnitude, and a phase. And the third one involves complex numbers. I have to make that a separate lecture, maybe even two.

So complex numbers, where do they come in? It's a totally real equation. If I think about all this that I've done, it was all totally real, but there's a link-- the key fact about complex numbers, Euler's great formula will give me a connection between cosine omega t and sine omega t with e to the I omega t. So at the price of introducing that complex number, imaginary number i, or j for electrical engineers, we're back to exponentials. We're back to exponentials. So that'll come in the next lecture. 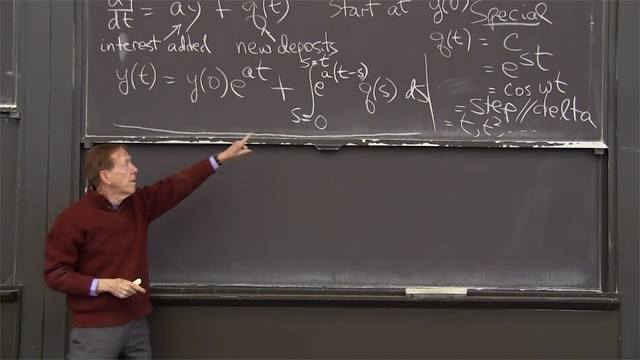