I'm coming back to the number one example, but not the easiest example, of a second order equation with an oscillating forcing term, cosine omega t. We have to know the answer to this problem. And it's a little messy, but the method is not messy. The method is straightforward.

And imagine this substituted in there. I'll get some cosines. So the cosines on one side will match the cosine on the other side. And also from the derivative, I'll get some sines and they should match 0 because I have no sine omega t on the right hand side.

M involves a C minus omega squared. M is coming from the cosines. And we get cosines from that term and that term. Divided by some number, D, that I'll write down.

And N is just B omega divided by that same D. And now I'll write down D. That's C minus A omega squared squared plus B omega squared. This is what comes out from the two equations for M and N.

I just solve those equations. This D here is the two by two determinant if we think about the linear algebra behind two equations. And that's what it is. And so the answer now is in terms of A, C, B, and D, which is a mixture of all of A, B, and C. That's the solution.

Only I always want to show you a different form of the solution. And in this case, a better form. Because the most important physical quantity is the magnitude. How large does y get? What is the amplitude of this?

This is a sinusoid. And we remember that every sinusoid can be written in a polar form. Says that y of t is some amplitude of G, the gain, times a cosine of omega t with a shift, with a lag, with an angle alpha. So I have two numbers now.

That's the gain. And this is the phase shift alpha. And that's an attractive form because it has only one term. The two numbers, G and alpha, get put into a single term where we can see the magnitude of the oscillation.

The square root of M squared plus N squared. And if I put M squared and N squared, then I have D over D squared. I get that answer. That's the gain.

Let me write that word, gain, again. Because you got it there. Here it is again. And as always, the tangent of alpha is the N over the M, which is just B omega over C minus A omega squared. I like that polar form.

And I feel I should just do an example. I didn't do any of the algebra in this video. But you know where the algebra came from. It came from substituting the form we expect for the solution. And of course, that form that we expect is the form we get provided omega, the driving frequency, is different from omega N.

Well, no. I guess we're all right even if omega is omega N, because we have a damping term. So that's the answer.

Two simple things, but I have to add them. And in my mind, I don't necessarily see how the cosine adds to the sine. But the sinusoidal identity, the polar form, gives it to me. So what is it in polar form?

When I add the cosine and the sine, I get a sinusoid that's sitting over pi over 4, 45 degrees. So those are the two forms. So in a nice example, we certainly got a nice answer. We certainly did. Yes.

So that is the-- worked out, more or less worked out, in principle, worked out-- is the solution to what I think of as the most important application when the forcing term is a cosine. So it gives oscillating motion. It gives a phase shift. And it gives these formulas.

The only thing I would add is that I need to comment on better notation. So I have used in these formulas A, B, and C. But those have meaning as mass, damping constant, spring constant. M, B, and K.

And it's combinations of those that come in. So let me just take this moment to say better notation. Or maybe I should say engineering notation instead of A, B, C, which are mass, damping, spring constant.

Well, that's already better to use letters that have a meaning. But the small but very important point is that two combinations of A, B, C, M, B, K are especially good. One is the natural frequency that we've seen already, square root of C over A.

Ha! You'll say, where does that come from? Or I can use these letters, B over the square root of 4mk. That damping ratio is, so to speak, it's the right dimensionless quantity. The dimensions of this ratio are just numbers.

Otherwise, subtraction would be a crime. So they have the same ratio and the same units and therefore the ratio is dimensionless. Let me write that word. Dimensionless.

So conclusion. I could rewrite the answer in terms of these quantities omega n and zeta. I won't do that here. That can wait for another time.

But just to say since we've found a solution to the most important application with cosine omega t there, since we found the solution, appropriate to comment that we could write the answer in terms of omega n, the natural frequency, and z, zeta, the damping ratio. Thank you.

A Practical Guide to Deep Learning: From Data to Deployment

How much do you know about power conversion control? 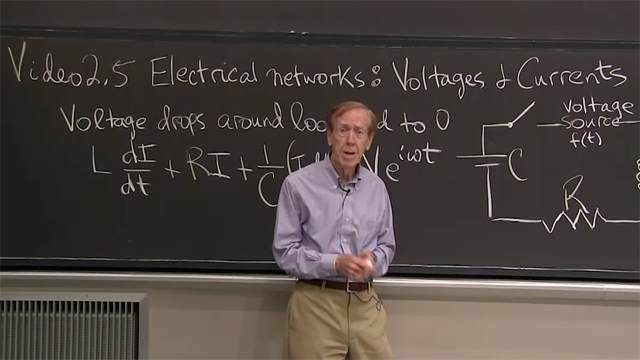