From the series: Microgrid System Development and Analysis

In the second video on microgrid systems, you explore different concepts required to design control strategies for distributed power systems. The focus is to introduce a microgrid example with a utility-scale energy storage system (ESS). This ESS provides peak shaving for the local microgrid and can be used to support the microgrid when islanded. Both a desktop simulation and a Speedgoat hardware-in-the-loop simulation with an Allen-Bradley PLC are used to test and validate the supervisory microgrid control strategy prior to grid integration.

Large-scale distributed power systems typically adhere to IEEE 1676, which introduced the concept of power system building blocks. Rather than a single controller regulating all individual signals, the control architecture is hierarchically divided into distinct control strategies, such as converter control, switching control, and application control. In other words, the power system building blocks can be separated as individual units with low-level controls and overall supervisory controls. The supervisory control system for a microgrid is known as the microgrid controller.

Low-level control strategies focus on switched-mode control and converter control. At this level of control, power system control focuses on voltage and frequency regulation or tasks like reactive power control. Supervisory- or application-level control focuses more on the coordination of the low-level distributed energy resources (DERs). Tasks can include microgrid islanding, black starting the grid, or participating in energy markets. As a result of the layers of control tasks, the microgrid controller must be tested and validated over a range of operating conditions to adhere to new standards such as IEEE 1547. Real-time simulation and HIL are increasingly used to perform such validation tasks. 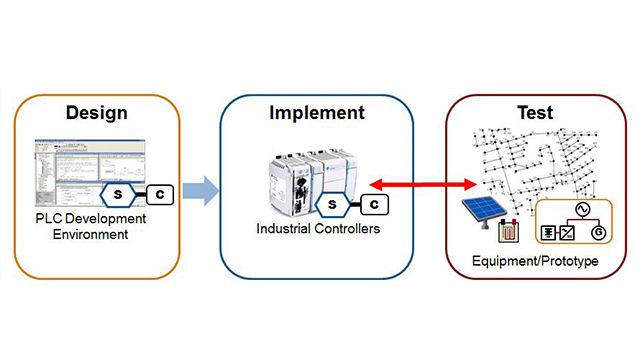 16:26
Test Drive Your ADAS Algorithms: From Desktop to Real Time

47:48
HIL Simulation and Testing with Simulink Real-Time and...